“A mind is a terrible thing to waste…at any age”

We bring continued quality of life and intellectual stimulation to senior residents in independent and assisted living community  environments. Lifelong Learning presentations are designed for seniors who have always enjoyed learning, continued education and the changing world about them, however have eyesight, ambulatory or age issues that make access to  learning and intellectual stimulation difficult or impossible.

This presentation and lecture is one of many offered by HRGread.  Contact us to schedule a date for your location!

“Once again Paul, an excellent presentation yesterday. Residents and co-workers thoroughly enjoyed it even those who were only able to stay for a short period of time. Thanks again – definitely one of the finest business decisions I’ve made”.

We also bring along a sense of humor!

A note from an Independent Living community Executive Director:

“By the way, the presentation HRG did was a huge hit! The residents really loved it and are asking for more!!  We followed it with a themed social with champagne punch and speakeasy food items.  The presentation generated lots of conversations about the residents’ personal experiences as they related to that period.  I’m sure the pin up WWII presentation will be even better since many of the residents will remember the time well!”

“I Have a Dream….I say to you today, my friends, so even though we face the difficulties of today and tomorrow, I still have a dream. It is a dream deeply rooted in the American dream.”

A Baptist minister, Martin Luther King, Jr. became a civil rights activist early in his career.  He led the 1955 Montgomery Bus Boycott and helped found the Southern Christian Leadership Conference (SCLC) in 1957, serving as its first president. King’s efforts led to the 1963 March on Washington, where King delivered his “I Have a Dream” speech.He is best known for his role in the advancement of civil rights using nonviolent civil disobedience. 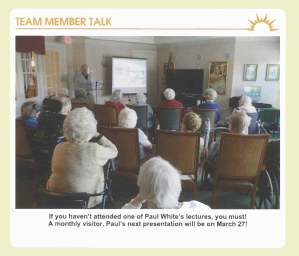 Paul White has been elected to the Board of the American Overseas Memorial Day Association. The AOMDA http://aomda.com is responsible for the annual placement of American flags on all know graves in europe of American Service persons and the coordination of annual Memorial Day ceremonies at American Military cemeteries in Belgium, France, Holland, Italy, Luxembourg, Tunisia, and the United Kingdom with support from American Embassies, Consulates, The American Battle Monuments Commission and American Legion Posts and local groups.

See video below for the latest HRG historical happening in Bony, France  this past Memorial Day. Paul White founder of HRG had the honor to speak (en Francais) at the Somme American Military Cemetery Memorial Day ceremony in Bony, France.

As part of the overall American Overseas Memorial Day Association (AOMDA) program,  Paul  honored all veterans and American soldiers who gave their lives in defense of freedom and liberty and are buried overseas.

HRG founder Paul White to speak on behalf of over 100,000 American military servicemen who fought and died for freedom and are buried in American Military cemeteries throughout Europe.